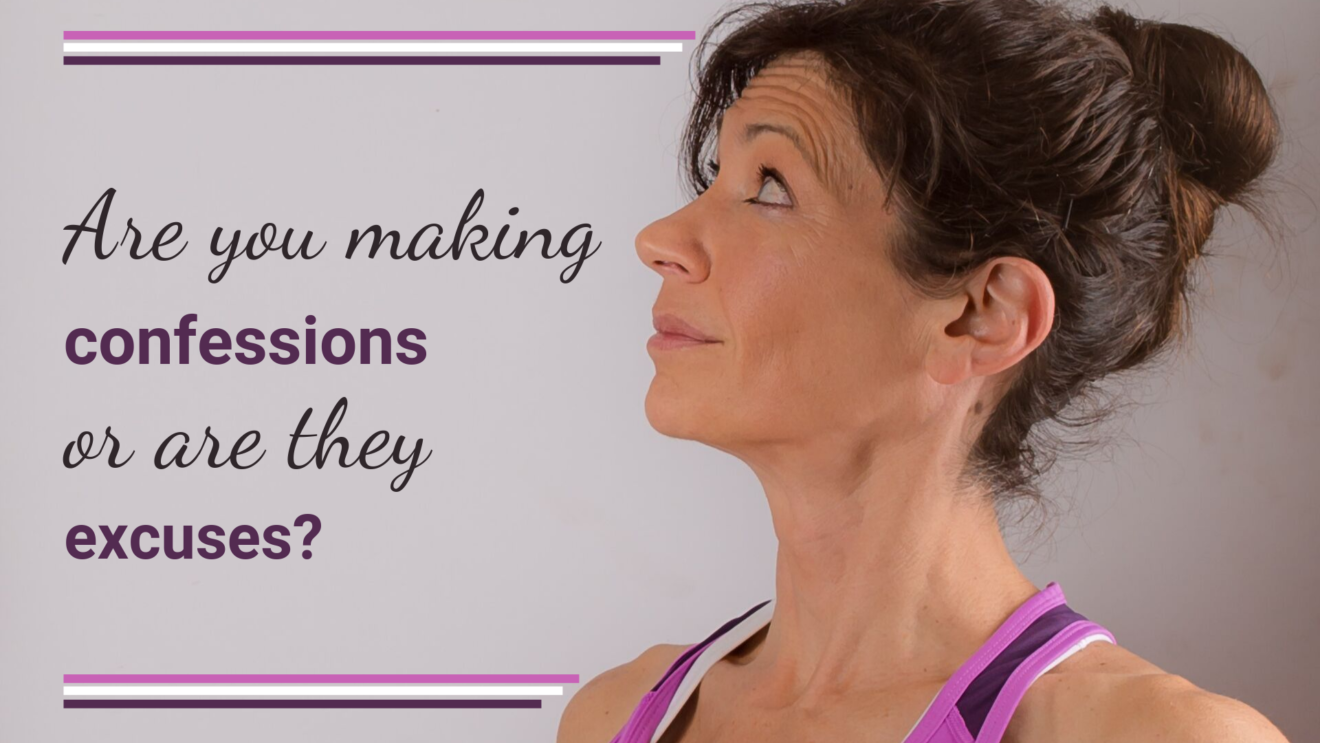 Confessions or excuses? And what’s the difference?

We all declare boldly that we hate excuses. Sometimes we admit to making them. But how often do we make confessions when we are really justifying doing or not doing something?

Those sneaky, dark excuses we don't even want to acknowledge to ourselves.

I'm rarely ever late. My parents raised me that way so it's a lifelong habit. There is no such thing as being fashionably late in our house. That's just another way of saying “I have no respect for anybody else's time.”

I still remember about 25 years ago – yes, I'm that old – I arrived late at work. Probably about ten minutes late. And I had no idea how it happened. I guess I just managed my use of time badly that morning or something.

When I arrived, the owner of the business was there. She would stop in infrequently and unannounced. And when she did you could cut the atmosphere with a knife. The nicest way I can put it is that her human relations and people skills needed more than just a little work.

When I walked in, not at all prepared to try and explain myself, there were a few other employees standing in a little line in front of The Boss. I dutifully joined the line and stood there listening to this woman barking at each person, one by one.

I still remember the sweet little blonde girl – her name was the same as mine, but spelled Leigh. Her voice was trembling as she tried to explain something about some transportation delay. I gathered all of the people in front of me had the same problem that day.

Nonetheless, the mean Boss Lady blasted out warnings and dark, dire, dreadful threats to each employee, dismissing them each in turn with a wave of her arm.

“I expect better from you!” she said curtly. I always hated that. It's like you're supposed to take it as a compliment, but at the same time you know you're being insulted.

Somehow, in spite of my almost full minute listening to everyone else, I didn't have anything for her. I heard myself blurt out,

The mean Boss Lady glared at me, throwing her arms up in the air dramatically in exasperation.

“Ugh!” she said. “Just get ready and start working.”

That was the end of the discussion. No threats. No discipline.

Getting Away With It

This was so long ago, so why do I still remember it so clearly?

All my co-workers had a valid reason for their delayed arrival. I did not. Each of them was well and truly reprimanded and I sailed through and carried on with my day.

At first I thought it may be my reliable track record. I don't think that was the case, much as I wanted to believe it at the time.

The mean Boss Lady probably didn't know or care what time I showed up for work every other day. She was visibly frustrated with me though. She was in a nice little power flow and my answer threw that off course.

It didn't justify me being late. That was bad judgment on my part and I probably got stuck into doing something before I left and wasn't paying attention to the time. I don't recall. It doesn't matter now. That's not the point.

We Live In a World of Excuses

It's just the way things are, whether you like it or not. We all do it from time to time. Some of us make excuses a lot of the time. So much so that we don't even realize we're doing it. Whatever you practice will become your normal.

There's a new appreciation now for a bit of transparency. Kind of ironic, when the vast majority of social media posts only show the best photos and best stories. Not all. But most.

So when someone makes a confession about being less than perfect, it's refreshing. It makes them feel real and relatable.

Last week I admitted to not wanting to go out and run a few times. I went and did it. So it was cool to post that because I confessed that I didn't want to and was still able to put it out there that I resisted temptation. Nothing wrong with that.

Then I noticed a trend. My training week goes from Sunday through Friday. Today was the fifth run, the third day I had to fight with my brain to get out of bed. That happens.

But here's the rub.

This morning I realized there was a valid reason to trade my run for some recovery and mobility work. I need it. My muscles hurt. Putting that out on social media makes me look good. I could justify skipping the workout, or I could just go and do it. I did the latter.

So in spite of my confession, I still look good, right?

My entire purpose of sharing my story is centered around being helpful and supportive to others.

Other real, regular people, just like me, with goals, dreams and flaws. I have plenty of the latter!

I had to really check myself today on the delivery of my message. Everything in there is true. It is also presented in a way that makes the point of the story: Just get up and do it.

That's good advice. It's advice I give myself pretty much daily – even multiple times a day. But my presentation didn't allude to the fact that I was masking an excuse as a confession.

You Have to OWN it!

Do you make excuses and mask them as confessions?

Confessions are great. They let you show your weaknesses and mistakes as a likable attribute. You know. Stuff happens so I'm just going to ‘deal with it'.

For me, the difference between a confession and and excuse is a very thin line. However, the two are worlds apart.

You see, when I make a confession, I acknowledge something. I own it and have to face up to the fact that a specific area needs work. Don't we all have plenty of those! And then I actually need to work on it. But it all starts with that conscious awareness. You can't address an issue you don't acknowledge. And how do you acknowledge it if you water it down and mask it?

An excuse is pinning all the ownership on an external factor. A circumstance or maybe another person.

It's not that hard to make confessions. They help keep us real.

My question for myself today is: Do I use my confessions as excuses?

I tried that this morning, completely oblivious to the fact that I was doing it. If I'm completely honest about it, I wanted to go back to bed and I found a justifiable reason. So next time I decide, for whatever reason, to just go back to bed or stay home and do something else, I'm just going to call it what it is.

I don't mind putting myself out on the burner. We tout around the hashtag and phrase “Progress, not perfection” and it's a great statement. But it's only as great as the workable meaning you are willing to put into it. You don't have to justify everything. You also don't have to share everything. But when I do, I want it to be completely transparent and honest.

I want to relate to real people. Others help me. They help me see my weaknesses and my strengths. It's kind of hard to look someone in the eye when they think you are standing a few feet above them because that's how you project yourself. I don't want to be ‘above' the people I talk to. I want eye level.

My progress comes from being honest with myself, before attempting to be honest with others. If I don't have it and practice it , how can I share it with integrity? 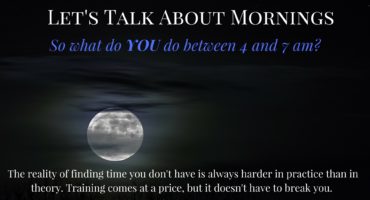 Finding the Time for Training Comes at a Price