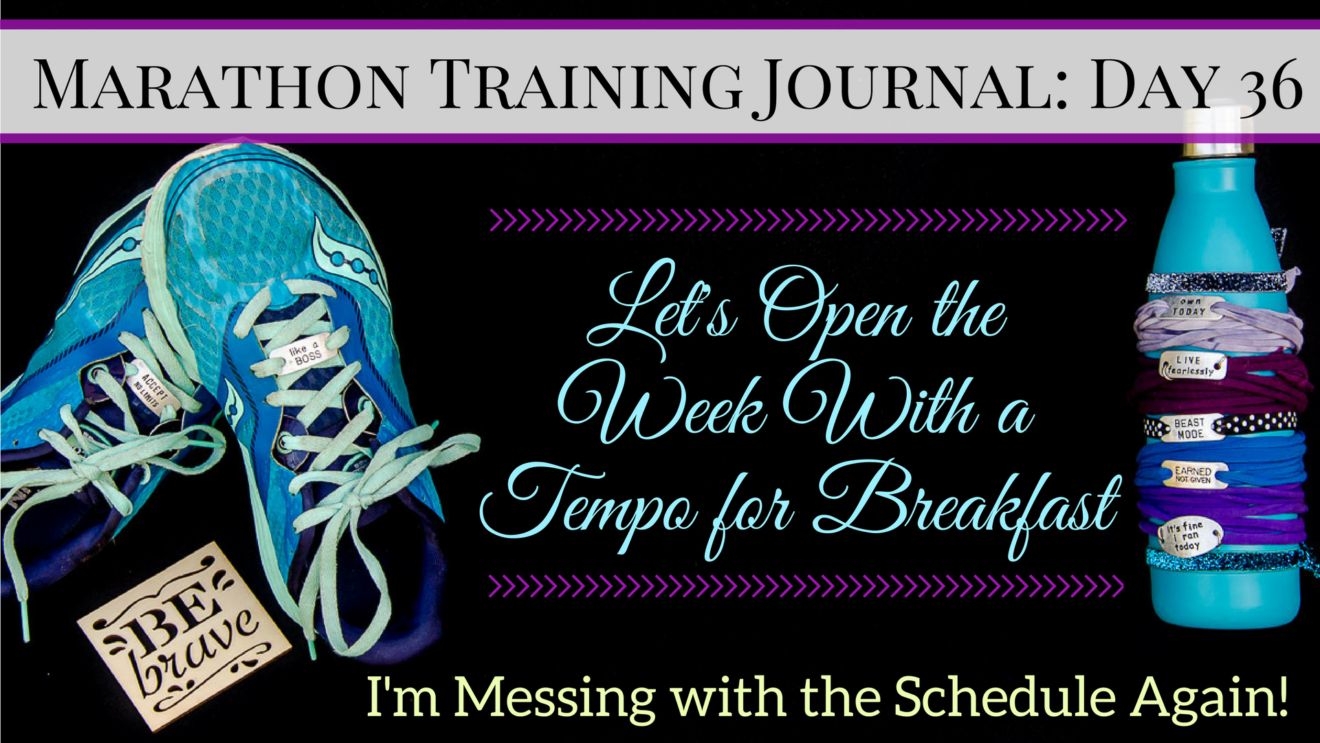 It's hard to believe I'm starting Week Six of my training schedule.  It's kind of scary in a way. This is how the weeks just roll by and next thing I know, it will be taper time.  There is usually no plan for my Monday run, but today just felt like a good day for a marathon pace tempo run. It was a couple of seconds slower than I need to be, but close enough that I'm happy. Most importantly, it felt great!

I didn't plan this. Actually when I went to bed last night I wasn't sure how I would feel after yesterday's intervals. Although if you read my update, I didn't quite hit the hard effort I should have reached. Until this week, Mondays had no structured run. It was whatever the heck I felt like. In other words, the best kinds of runs!

I'm trying to space my speed workouts out and pull them a little further away from the second half of the week. I only need two per week right now. If I had my way, there would be no speed work unless I felt like it, but it's there for a reason.

Meet My Lazy Side

I will find any excuse to trade up speed sessions for long, easy runs. It's simple. I am lazy about it and I don't like being that uncomfortable, because I run for fun and suffering isn't fun for me.  Not even for the glory. Unless I'm in the mood.

Well I was in the mood for it today, but not for suffering. Last week I enjoyed a goal marathon pace tempo. It doesn't make me suck as much air as these 10k and 5k paces. I don't care for those.  So I should do something different again today; after all, I really feel like doing this workout!

My legs were fresh, I feel rested and completely recovered from my cold and even though I did my intervals yesterday, I didn't do them as prescribed. I had a good excuse. My watch wasn't playing so I had to guess.  Well, that was a good reason for me and I am not redoing them!

A Little Off Pace

So my marathon pace tempo run was a little slower than goal marathon pace. Actually it was right on the money, but only just and you know how it goes. You have to account for slowing down at water stops, weaving through runners in congested areas and if you're like me, a super conservative start as well. That means I should have been running at least five or so seconds per mile faster than I was.

To be honest, I wasn't paying very close attention to my watch, but I did sort of keep an eye on it. It is challenging to maintain an even pace on uneven ground with some ups and downs and little loops.  This is why I prefer to run by effort.  The thing is, then I have to do math and if it doesn't suck enough during the later hours of the day, math before sunrise is not my idea of fun.

I was actually really pleased with how close I was, but can't ignore the fact that I need to start doing some more half marathon pace tempo runs; or slightly faster. 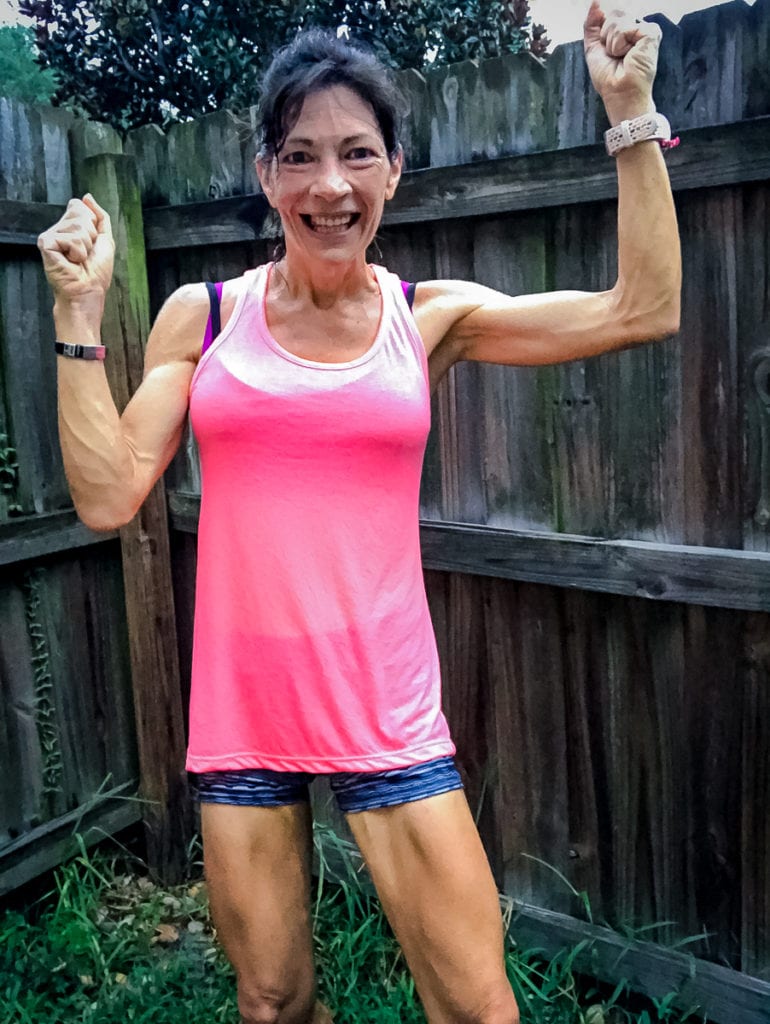 Then again, this is where it gets hard for me. Time alone is not a powerful enough motivating factor for me. Bottom line is that I need to work harder on speed sessions.  Nothing more to it.

I love knocking out a nice ten mile run on a Monday morning. It's become my habit to start the week and maybe I should have shortened it because of the type of run. But where would the fun be in that?  Besides, I am doing some additional tweaks just for this week, because I have no option but to switch my rest day.  I shall explain in a moment.

Now that I'm testing out a change to my running schedule, I don't want to mess around with it too much if I can help it. It just happened that something came up this weekend.  Something that I knew about at the end of last year … and forgot.

An Email and a Different Day Off

I got an email a few days ago. Well, I get lots of emails and many of them are never opened, but this one got my attention.  It was about details for packet pick-up.  What packet pick-up?

I signed up for a ten mile race about eight months ago.  When I was injured, the way some of the race organizers were so inflexible about changing distance or deferring race entries, it really soured the taste for races for me.

I canceled a couple for spring, deferred one until next year, lost out on one and then for my half marathon in June I decided not to show up. I just didn't feel like it.

So it turns out that this race is on Saturday, which is usually my rest day. I am not racing it and will use it as a training run, but I need to figure out which one. I may have to skip my long run this week because I usually do that on a Friday. This is something I haven't figured it out yet, because I was scrambling around to find out what and where I'm actually running. I see it is marked as a ‘hilly course'.  I don't like that and fought a bit of temptation not to show up for this one either. But I'll go.

I'm Not Obsessed About Signing Up for Events

This is a bug that never really bit me. I know so many runners who thrive on going from one race to the next, sometimes in a matter of weeks or less. The attraction in that eludes me for the most part.

I don't usually get to run in different places so it's something of a novelty for me. That's a plus. I love the race atmosphere. Meeting people is part of the fun. But it costs money to sign up for a race and I have to get up at insane hours to get there, stand around waiting for the start and then get back home afterwards. I want the atmosphere, the medal and the social aspects but I don't want to feel miserable pushing myself to the limit.

It's A Training Run With a Medal

This part is pretty cool for me. I love that I can do a training run with different scenery and not have to run alone. While I enjoy my solo runs on a daily basis, because it's all I really know, running with other people is a big draw for me.

I haven't decided what I'm going to do about scheduling my rest day this week. I will make sure I keep my miles lower on Friday for sure, because by Saturday that will be seven consecutive days of running, unless I skip a day before then.  It is yet to be decided and I don't know what I'm going to do. But whatever it is, you'll read about it over the weekend.