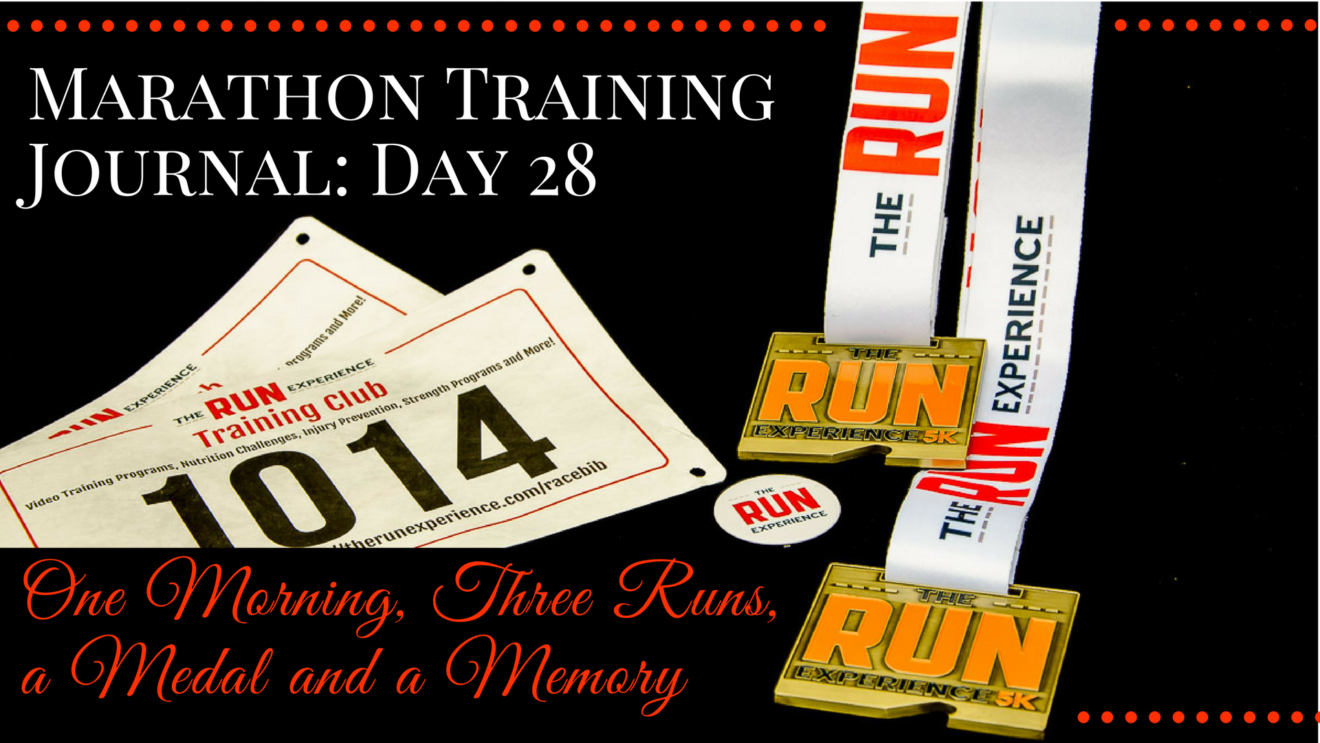 It's fun run Sunday with a twist.

I've been waiting for this Virtual 5K for a while now.  I am not a 5K runner and it is unlikely that I will ever love the 3.1 mile distance; it's just not my thing. But I had three really good motivations for doing this one. So I ran it three times.

Why I Don't Run 5k Races

First of all, I don't race at races. I have never given everything I have in a race. Training is another matter and it's not unheard of for me to push my limits until I feel physically sick. Or just just throw up to seal the deal and make it real.

The problem I have with 5K is that it is a really tricky distance to pace. I never quite get it right. In part, this is down to my preference for distance and maybe this is why it takes me so long to get going for a run. I know I have miles to play with so I take my time at the beginning and use them. No such luck in a 5K race. You have to be warmed up and ready from the start.

According to the pacing charts based on previous recent race times, my 5K pace is something that remains mostly untouched by me. Why should I work on it if I don't plan to run three mile races? I can't sustain the so-called recommended pace for more than a mile on a good day. Even holding it for 800 meters is unpleasant.  And why don't I get there? Honestly, I don't care.

So Run the Distance You Hate Three Times. That Makes Sense!

I said there are three reasons why I have been excited about this race.

Firstly, this was organized by the coaches who wrote my training plans at The Run Experience. I am completely committed to the training philosophy, but beyond that, I love the community. I want to be involved and be part of what everyone is doing there and this is really cool and exciting because I get to run, virtually, with many people who play a special role in my world of running.  Realistically, most of us will never get to meet in person. This is an opportunity to run together.  It means something to me.

The second reason I want to run is because when I was injured, I was moved and humbled by how many people supported me and showed how much they cared. I won't forget that. I promised myself I would find a way to give something back. This is an opportunity.

Thirdly, and possibly the most special to me, is that our daughter who has never had any interest in running, recently completed a beginner running program. She signed up and this is her first race; and the first time she is going to run 5K.  I want to be there and share it with her.

When I look at it this way, it doesn't feel so bad. It looks like a regular run … with pit stops.  I can do that.

I ran the first round to earn my own medal. After all, I did sign up for the 5K and I wanted to do it regardless. I wanted to run with my running buddies – virtually.  The medals are solid, heavy and totally awesome.  Easily detachable from the ribbon, magnetic on the back so you can stick it on the fridge and wait for it … the end is a bottle opener. A medal that brings the post race drink to you.  Yes please! (Beer was safely on ice, waiting for me). 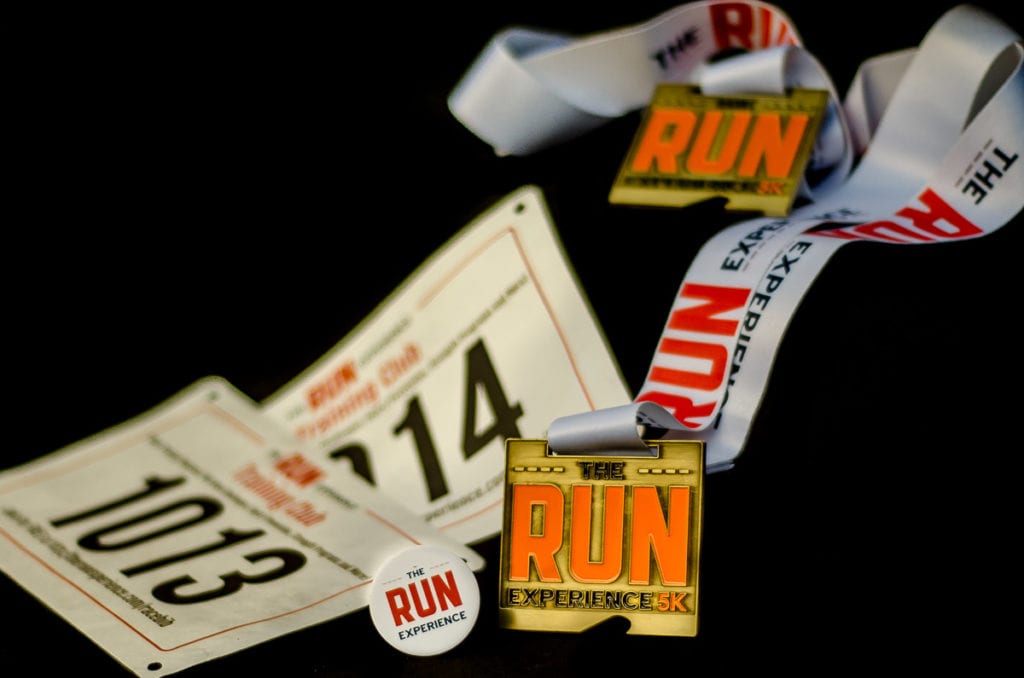 Because my daughter wanted me to do the other two rounds first, I had to keep the time of day in mind so that we didn't melt in the heat. It starts warming up pretty quickly and can become quite unbearable once the sun is over the horizon.  So I left earlier than I usually would on a Sunday.  And it showed.

Oh wow, was I still half asleep or what?  My brain was still on the pillow. I took a photo before I set out on the first loop. Very nice little chalkboard … but as you can see I had to take the photo again. You can laugh as much as you like. It was early! 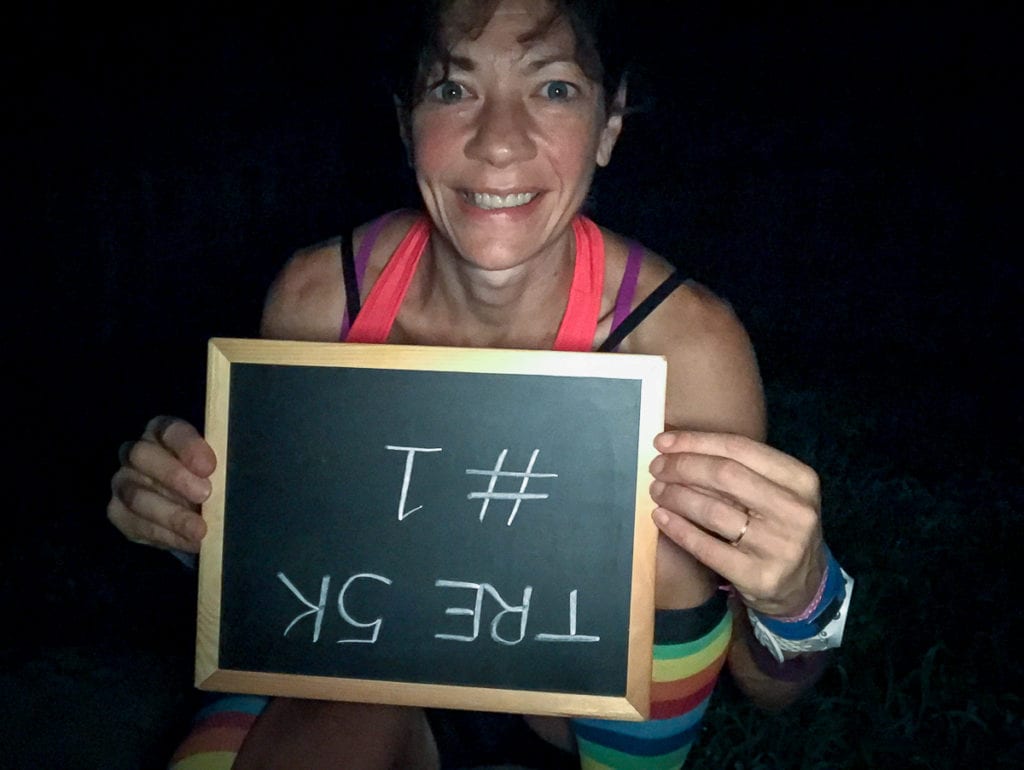 Don't worry. I fixed it with a new photo, but since you can read upside down I'm not posting another one.

I did a quick warm up loop and some drills to get going and then took an easy loop around for my 3 miles and change. There was no racing. I really wanted to just enjoy this and it was nice having no pressure on me.

Taking One For The Team

When I got back, I took another photo to post and announce to the group that I was ready for my round on behalf of the injured runners and those who have stuff going on and were unable to participate today.  Please pardon the sweat on the chalk board.

You don't have to work hard at this time of the year to sweat like a hog. I don't even try using all these polite little phrases about ‘glowing' and all that. I'm a little stinker, but I earn my sweat. 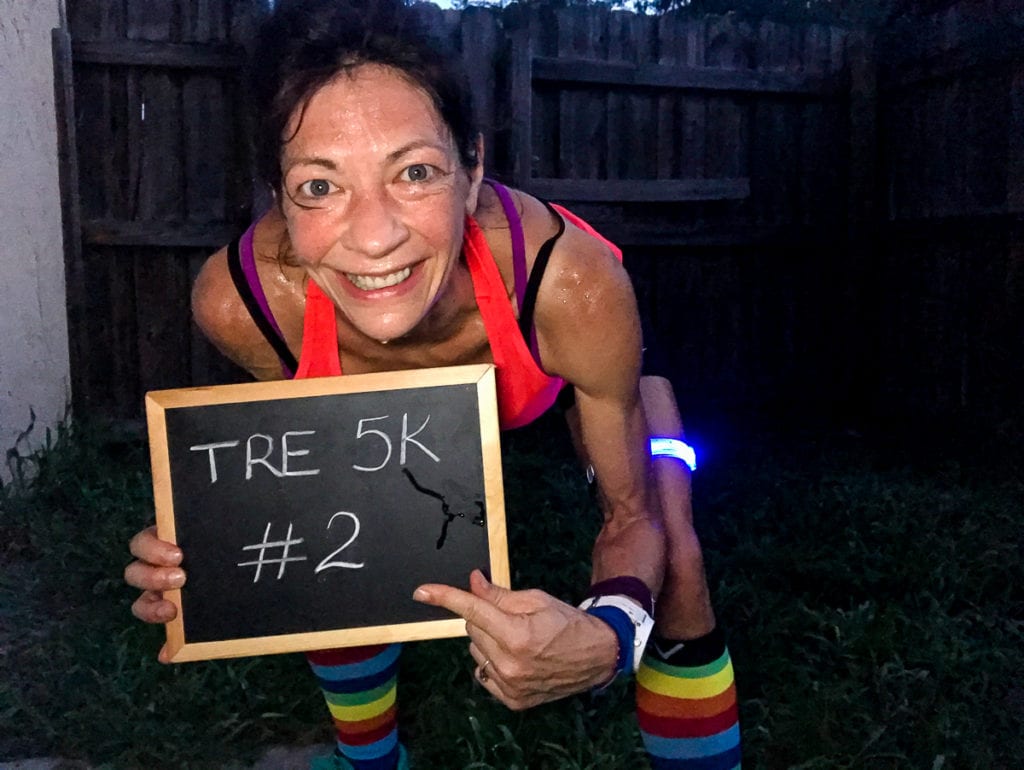 Each of these 5K loops had a different meaning to me, but every one is special in its own way.  Round two is on behalf of my support team. It doesn't matter if everyone I represented here knew me or not when I was injured. This is the thing about a running community. You just give where you can because you are never short of support at any time.

It was getting light so I removed the LED light from my leg.  It is actually a one size fits all armband. This is the problem with one size fits all is that it really doesn't!  But it fits around my leg and since my other little lights are bugging me right now, I am waiting for delivery of some new kick-butt lights.  I'll do a review on them later, but I'm really excited to try these.  I'll keep you posted, but that's another story. Meanwhile I also have my ridiculous socks, as my husband calls them. 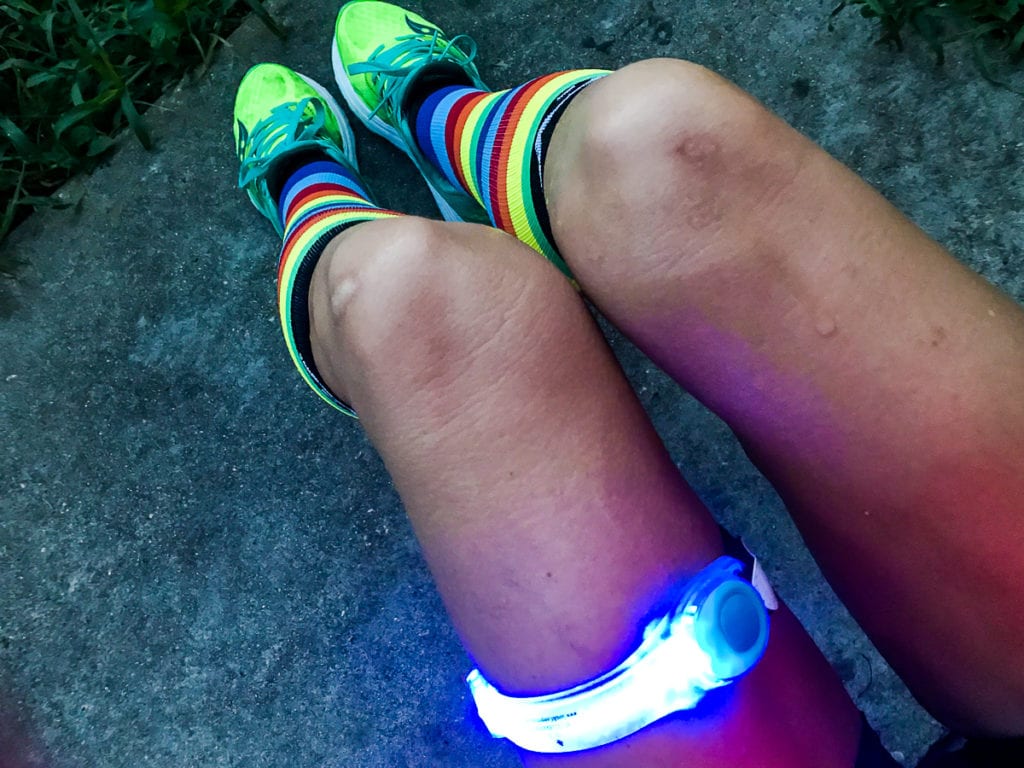 I sort of disappeared into memories and thoughts of when I was injured during this loop.  I remembered things I don't think about anymore. It is important to me that I never take it for granted that I can go out and run when I want to; even if I don't feel like it, I still have a choice.

I remembered messages, comments and kind words from people when I was so down because I couldn't run. Strangers I barely knew would leave a note and tell me they were thinking of me during their runs and wanted to check to see how I was doing.  You can't buy this stuff. It's also hard to explain what an impact it has and I don't ever want to forget that.

So this was a blissful run at an easy pace again as I just got lost in memories and thoughts of other runners.

Two Down, One To Go

This time when I returned, it was light enough to be worth putting on the medal for another photo. If there ain't pics, it didn't happen, right? 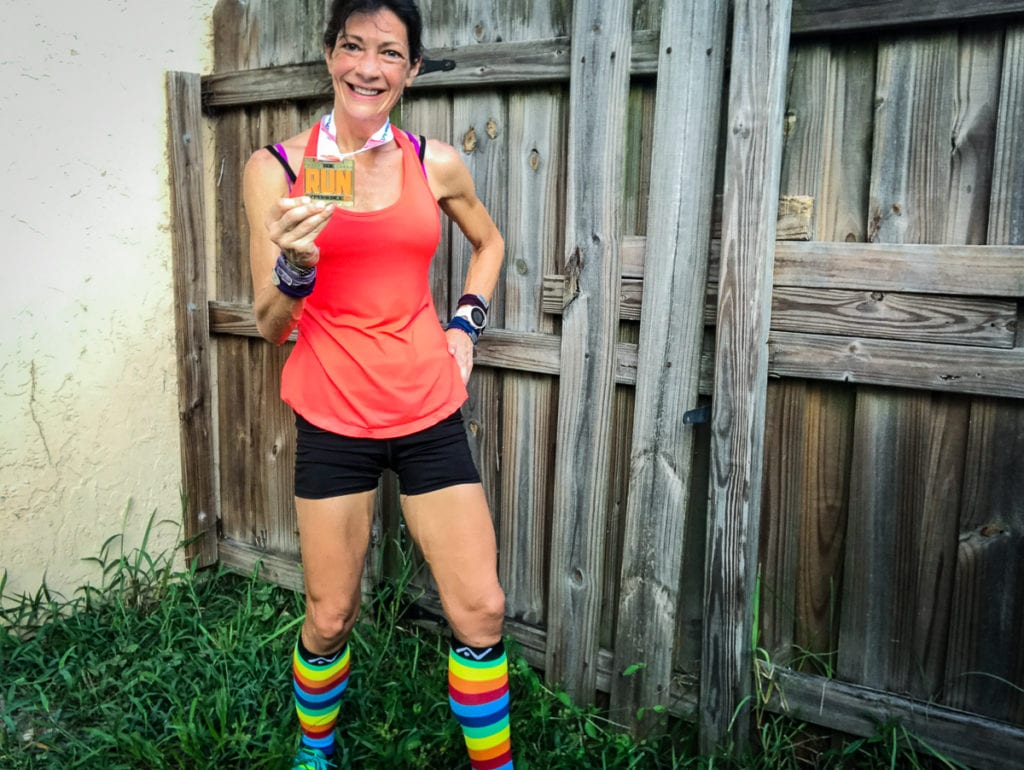 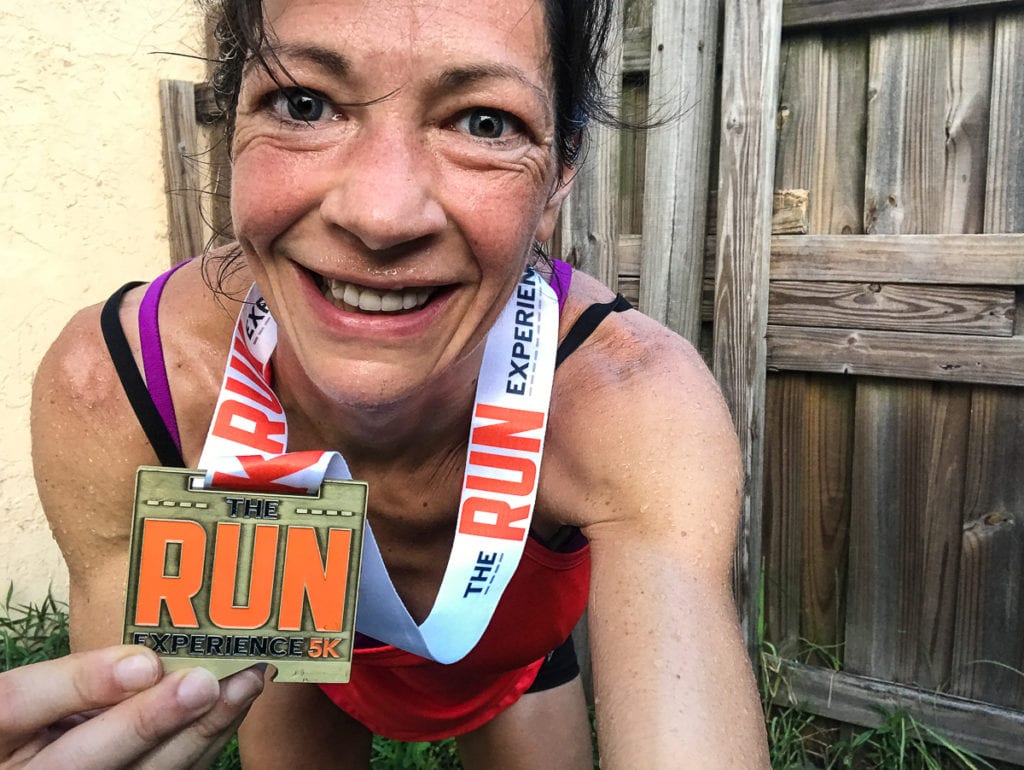 We cruised along and I told her to set the pace and I would run alongside her when I could and behind her when there wasn't space on the sidewalk for both of us.  This is her race and I want to be part of it; but she is in charge of it.

The route I took her is a little over 5K. It was a perfect loop for today. Not only did it give the full 3.1 mile distance but there is also just enough room on either side for a warm-up and a cool down walk.

As we ran by a mini lake I pointed it out to her and mentioned that was the spot where I had hit my first continuous mile without stopping.

“I've never run a whole mile without stopping!” she told me.  I looked at my watch. She was wrong. It told me we had just crossed over 1.4 miles, but I said nothing. She made me laugh with her little comments and shared things she thinks about to keep herself going. It's so interesting to get back inside the mind of someone starting out.

It also throws a new perspective on the starting end of a journey into running. We were still going and I wondered if she was going to say anything about the incline we were starting to climb. Not a word.  It got quieter and I could see she was working. I was torn between making conversation and not wanting to distract her.

“Sure! This is your race.  But can you make it to that sign at the top?”

We got to the sign and she stopped.  There!  Did it.

“What?”  The expression on her face was priceless. I am so proud of her.

We did a lot of walking after that. We had lots of conversation and we laughed a lot. It's hard to run and laugh at the same time and it would be cool to do both. We did; just not at the same time.

If you walk some, does it still count as a run? Absolutely. If you run some it counts as a run. If walking keeps you going, then it's a great strategy.

So today my daughter ran more than a mile for the first time. She completed her first race and she ran her longest distance. Best of all, I got to do it with her on the same route where I managed my first continuous mile.

We earned our celebration when we got back, under the shade of the old oak trees. She's not old enough for beer so she got a Snapple instead, but she didn't complain. 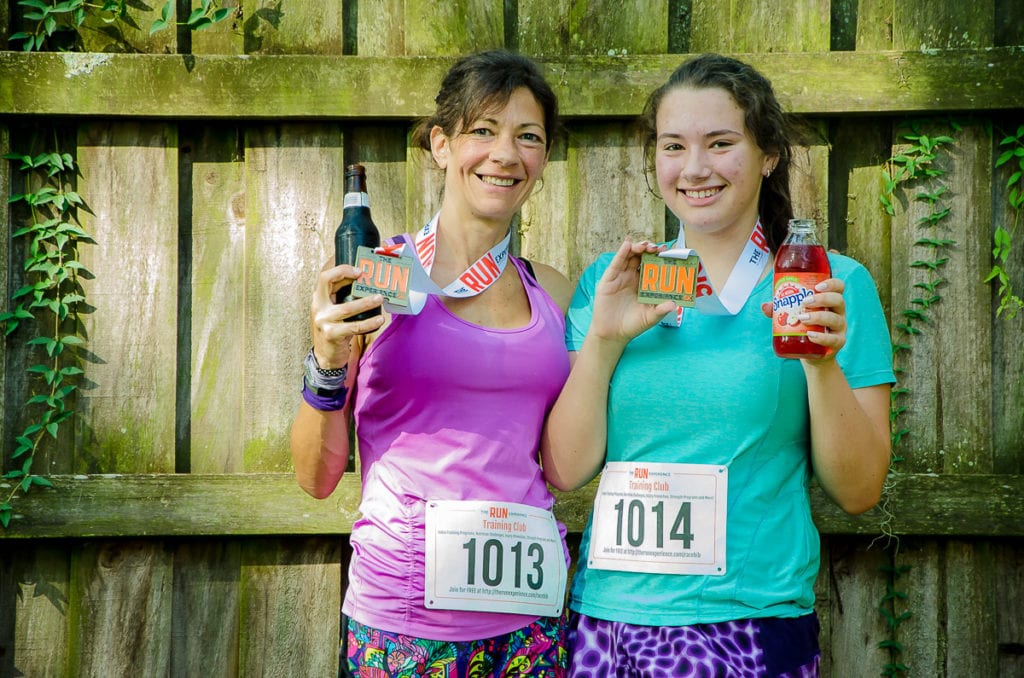 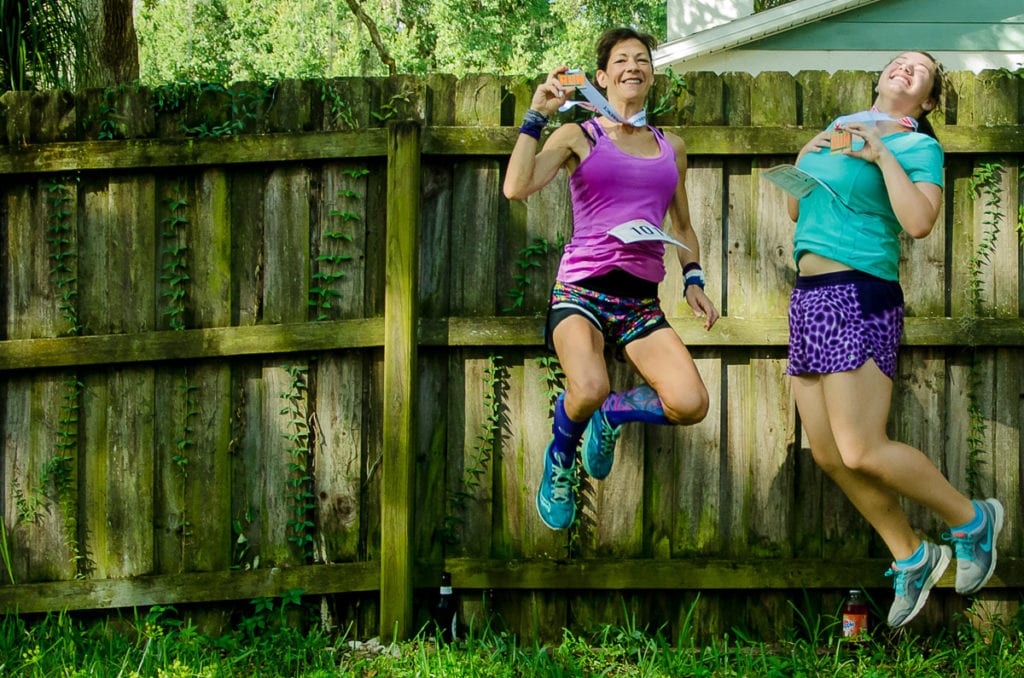 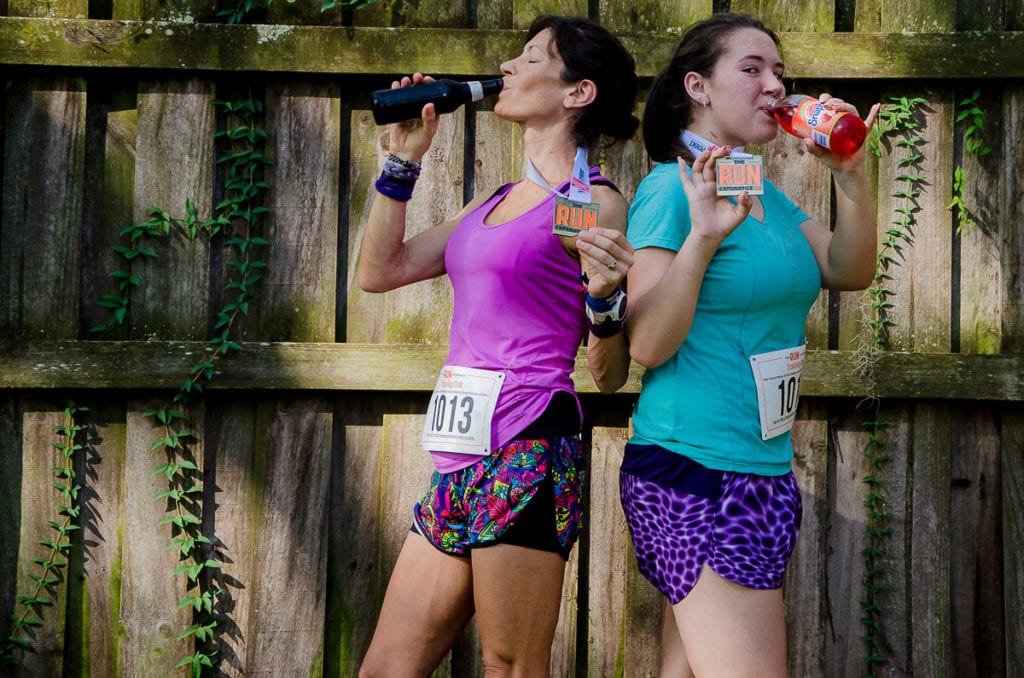 And a little bit of sweetness never hurt anyone. Especially in the form of chocolate.  It's been a good day. I hope this is the first of more runs together. 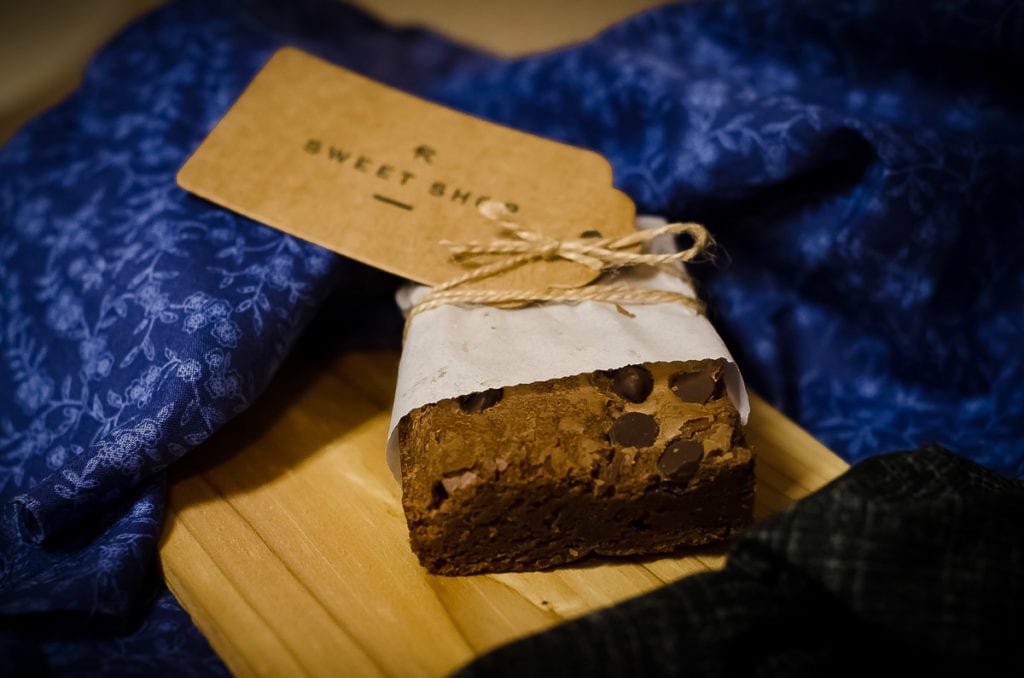