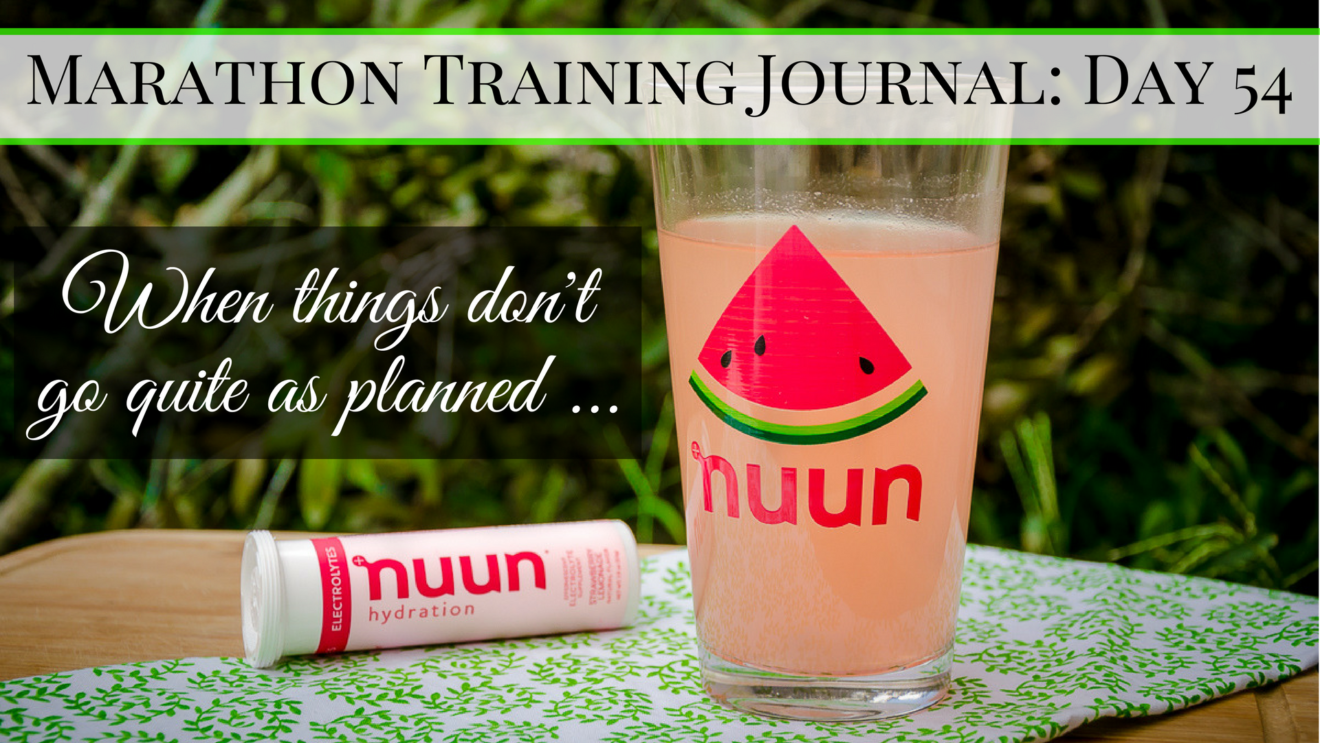 I managed to completely sabotage my beloved long run day.  It's not so much that I did anything wrong. The trouble is, I neglected some basic key things that I do without thinking and for most if it, I didn't do anything right. The result was a run gone wrong. Stupid stuff, but lots of small things pile on. You do not want to do what I did. It's just a slew of bad ideas with a disappointing result.

Do Whatever You Like Today, But Tomorrow You Pay

This training cycle has had a few bumps in it. Most of them have been my own doing and I'm not really as worried about it as I am aware that a little bit of structure will serve me well going forward.

Whether it's a long run, a hard workout or a challenging race, waiting until the morning of the run to figure things out can be a sure road to disaster. Fortunately this wasn't a disaster, but yesterday's blunders and neglect to give any thought to today's fourteen miles was at the heart of most things that didn't work out.

What I do today will have an impact on tomorrow. For ordinary daily activities, most of the effects are insignificant and go by unnoticed. When demands and expectations on your mind or body are higher or different, little things stack up really fast.

It's something I've had to learn the hard way. I have fumbled through more than a few runs, trying to figure out what went wrong, only to realize much later on that it was something I did a day or two before. Sometimes it was a series of things I'd been doing for even longer that collectively showed up with a big blow. You can probably see where this is going. Yesterday I screwed up big time.

What Did I Do Wrong?

Way too many silly things and I'd love to say I learned from this, but it's nothing I didn't already know from previous mistakes.

To make things more interesting, it's not so much what I did wrong as it is what I failed to do right. It's a classic case of neglect to plan and prepare. I'm actually quite ashamed to start listing all the seemingly little things that joined forces to kick me in the teeth today. Perhaps it's a good thing though. Once in a while a reality check is beneficial.

Runs like this are necessary. They yield all kinds of useful information. In this case, it's less of a learning curve and more a case of a kick to remind me how important little details are.

Bottom line: I own it. My run sucked because I broke too many rules. Click To Tweet

Somehow I didn't really eat anything yesterday. Not noticing at the time is not an excuse. It's an old habit, and a bad one at that. Where I could get away with it when I wasn't training as much as I am now, this is an area that should be checked every day; multiple times a day. How's the fuel intake? Not good enough? Fix it!

Some urgent messages grabbed my attention as soon as I got back from my run yesterday. I had prepared my breakfast and tried to pick at it while I was working, but got caught up in the demands of the morning and thought I'd get a good lunch instead. When lunch time rolled around, there were more matters that needed my attention and my soup sat in the microwave for long enough that it wasn't a great idea to keep it.

By dinner time I wasn't feeling so great. Probably because I hadn't eaten, but that never even occurred to me. So I made meals for the family and sat on the couch with a glass of Nuun. I didn't give it a second thought.

Drink, Drink and Drink Some More

Needless to say, hydration wasn't particularly stellar either. Coffee in the morning, coffee in the afternoon and by 9 pm I was feeling so awful I lay down and fell asleep almost immediately. This is almost unheard of for me. I guess I needed it, but while more rest probably did me a lot of good, there were to many holes in my nutrition and hydration plan and those likely countered the benefits of the extra sleep.

My only saving grace was the glass of Nuun I fizzed up in the middle of the day. It helped, but still left me woefully short on liquids.

Of course, because I wasn't awake this didn't run through my mind either. Second mistake of the day; not even the day of the run, but these things pile up and filter into the day after.

For Goodness Sake, Get a Band Aid

Yesterday I went outside with shoes on that rubbed an ugly blister on my left foot within minutes. Walking around barefoot all day, I didn't pay any attention to it because it wasn't bugging me barefoot. This morning I grabbed some short sports socks, laced up my running shoes and didn't think to put a Band Aid or some tape over it. I paid for that dearly!

Nothing New On Race Day

I don't break this rule. It's something that makes perfect sense and plenty of training runs have reminded me why this is important. You just don't know how things will work out and better to try it on a short training run than an important event or long run. Now the one time I break this rule is with shoes. I've never had a problem with running shoes so I put them through the mill the day after I get them.

I had to scramble around for running clothes in the dark, trying not to wake anyone and picked up a brand new crop top. Standing with a small flashlight, I ripped the tags out and put it on. Super soft and silky to touch, this would work out great. I threw my favorite white tank top over it and I was good to go.

I woke up this morning feeling pleased that I got several extra hours of sleep. That would do me big favors for my run, right? Well, yes, except that because it wasn't planned, I didn't charge my watch or my Knuckle Lights. They had enough power that both slip-ups went completely unnoticed as I was so set on getting out of the house early to be back in time, given that there were extra miles to cover.

A few miles into my run I noticed that my watch didn't have much charge in it. It would probably get me by and if a battery is going to die on me, I'd rather it's the watch than my phone in case I need to call someone to rescue me from my run. It annoyed me though. It's not a big deal if the whole run isn't tracked, but I can see the time on there without having to fiddle around for my phone. It survived the run and I plugged it in after I got back with all of four percent left in the battery.

My heel burned as my socks rubbed against the raw skin that I scorched on that shoe yesterday. I kept thinking about going back for a Band Aid, but I sucked it up and carried on.

A terrible side stitch showed up around mile ten or so. I just don't get these. When I do, it's almost always something I can easily pinpoint that I did relating to food. This time, it's probably because I didn't have any!

Can You See It?

About the same time, the new sports bra felt like it was burning into the skin under my arms. I fiddled with the straps wondering if they were twisted. It wasn't impossible. Getting ready was done in the dark and in haste. Nothing felt like it was out of place and I kept tugging on it to pull it away from the skin that was starting to hurt enough to become a distraction.

Of course it was still dark and my Knuckle Lights were doing the best they could after a few hours this week and no top up charge. They give plenty hours of light; when the battery is charged!

This is what I get for rushing in the dark. Next time I'll close the door and turn on a light to get ready. Early nights are wonderful, but the next day is better if the extra sleep is planned.

Light started to glow through the darkness as sunrise approached. I noticed some dirt on my white top and assumed I'd brushed past something in the dark. Nope. It wasn't that. The color from the charcoal crop top, drenched in sweat, was bleeding onto my much loved white tank top. I was ticked!

The cycle was briefly broken when I ran by a little lake, as smooth as glass, catching the colors of the early morning sky.  To heck with it. I'm stopping to take a photo. 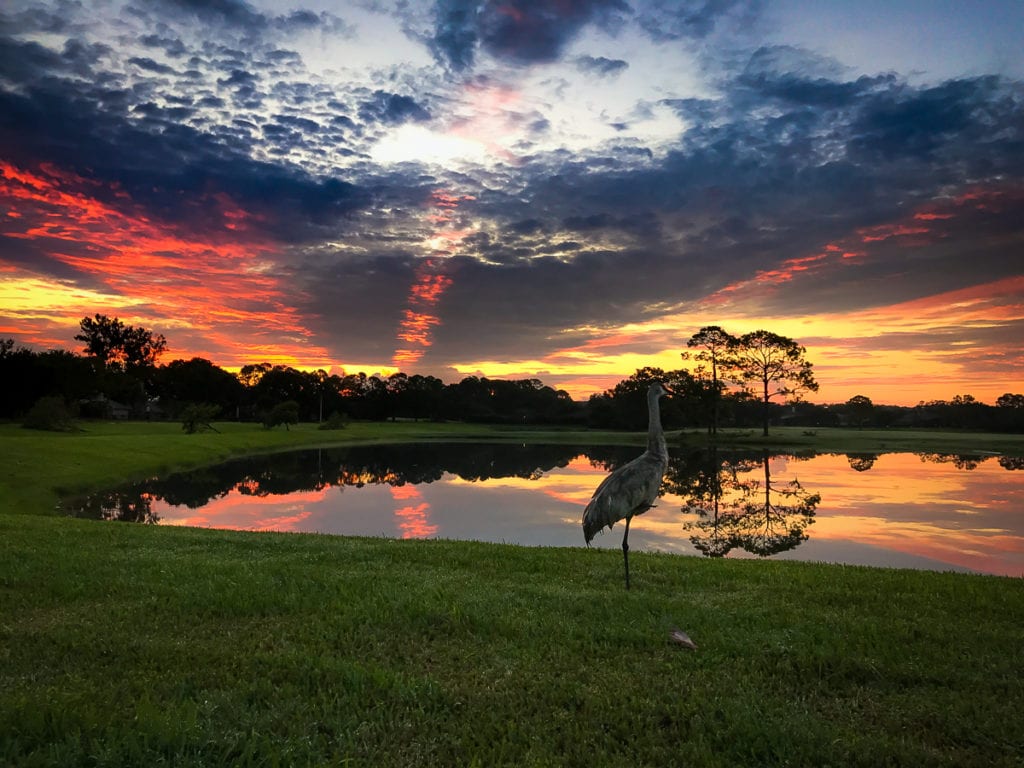 I have a habit of riding things out on a run. It's not always smart. Sometimes I use good judgment and call it quits if it looks like there isn't any benefit in continuing.

The problem with a long run, especially if you do an out and back type route, is by the time a bit of sanity prevails, you still have to get back home. So the last couple of miles felt really rough. I couldn't make up my mind if I wanted to just stop, walk home and be late or carry on running to get back as soon as possible.

I didn't really make a decision and just kept running through my dilemma. When I got back my foot was bleeding and so was one of the chafed areas under my arms. My side hurt so much that every step came with a conscious effort not to slouch forward. I toughed it out like a hypocrite trying to prove a point that didn't exist.

Some days the best thing for a run is an above average sense of humor. I rationalized like an idiot and still got home in one piece. 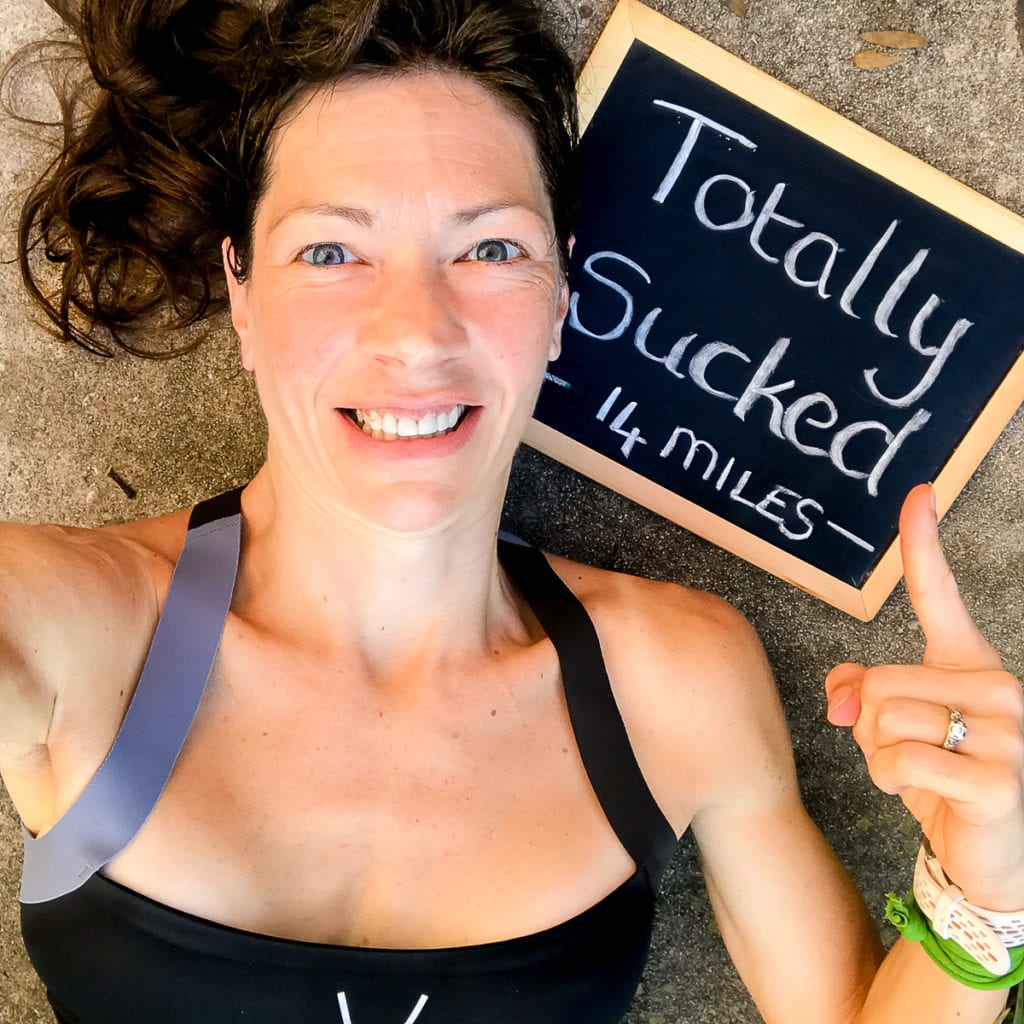 Long run days are my favorites. I feel quite cheated.  Of course that just means if I want to, I can plan better and do it again. The right way.

It's so simple, it's stupid, but valid just the same.

None of this is news to me. It's all in the basic laws of not messing up a run or a race. The runners' rules, which we learn to cite so early in our journeys. Yet knowing what to do and getting it right most of the time, doesn't mean you can stop thinking about it. Don't abandon the check list. When things around us change.

We're never too old to learn. We are also never too smart not to need a reminder of what we know.