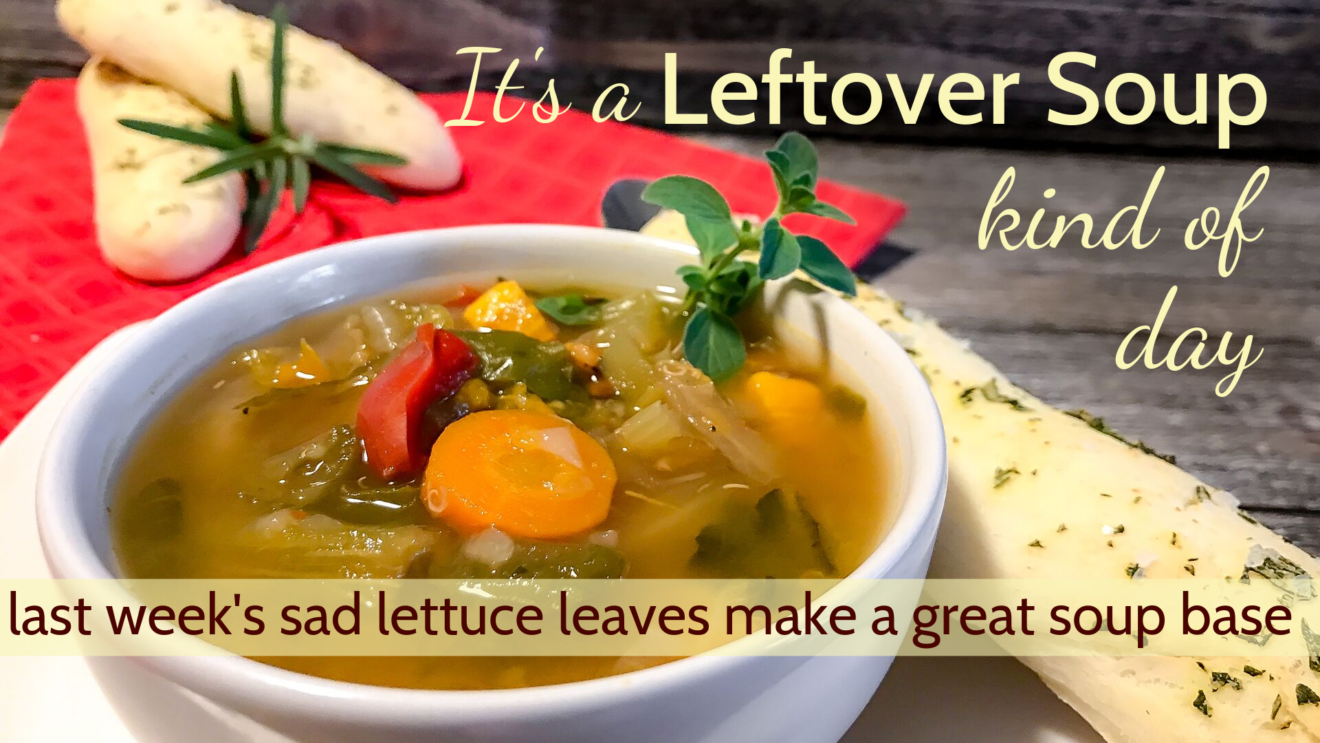 Is that Lettuce in My Veggie Soup?

I am absolutely terrible at following recipes. There's always something I have to tweak or adjust. Sometimes it's because I don't have an ingredient on the list.  Usually because I'm so darn picky and almost always, it's because I just can't leave the script alone. That's how I end up with lettuce in my soup.

I cannot stand throwing away good food and I'm generally really good at managing the grocery list alongside some kind of meal plan with prep to back it up. Last week we ended up with a couple of extra bags of mixed salad leaves. Yesterday it was clear that we weren't going to get through them all before they lost their crispness.

No problem. Lettuce works great in soup. I've done it for years. It's fine. Really!

Leftovers For The Win!

As long as the combination of flavors don't clash in a bad way and you have the right amount of stock in the pot, it's hard to mess it up. On the down side, if you don't write down what you put into the pot when you make it, don't plan on replicating it exactly the next time. I'm OK with that. Sometimes my husband is not. Especially when he sends me a text to tell me “Lunch was damn delicious” and I let him know I don't have a recipe.

Get that Lettuce in My Soup

So yesterday when I was making a grocery list I discovered that we had copious quantities of bagged lettuce. I guess it got hidden in the fridge and we bought it twice. The obvious solution was to make a pot of soup. Only this time I did note what I was doing. Just in case it turned out to be awesome or something like that.

I quickly got busy going through the fridge and gathering any lost and lonely items. There were several stalks of tired-looking celery, a lonely sweet potato, half of a fresh red bell pepper … you get the idea.

The second step is deciding what will go with the leftovers without any nasty flavor clashes. Usually with veggies you're pretty safe. A can of crushed tomatoes is usually a friendly add-in, but I tend not to use it when I'm using lettuce in my soup. I don't know why. It just changes the color and I don't like that. So I skipped those this time.

What Went Into The Pot

Unless you had a huge party and have copious quantities of leftovers, you'll need some base ingredients that aren't close to dying to make your soup. You could add chicken (brown it in a skillet first with some onions if it's fresh chicken or just throw it into the pot if it's already cooked meat). Obviously I need to add some stock and something to give it substance. Get creative. What's the worst that can happen? You were about to watch that food go to waste anyway.

This round I used: 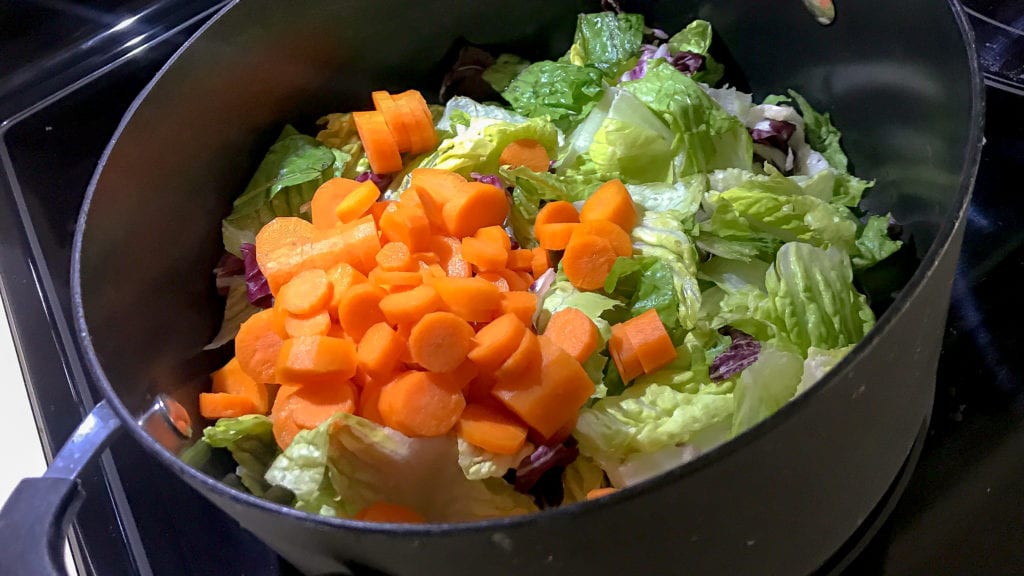 Throw It All In and Cook It

There is no method here. Unless you have raw meat or poultry, in which case, please cook it first, it doesn't matter what order you put it in. If you want to brown your onions and anything else that makes sense to get a head start for some flavor, feel free. Sometimes I do. Sometimes I don't. Yesterday I didn't.

I placed a large pot on top of the stove and just added ingredients as I chopped or prepared them. 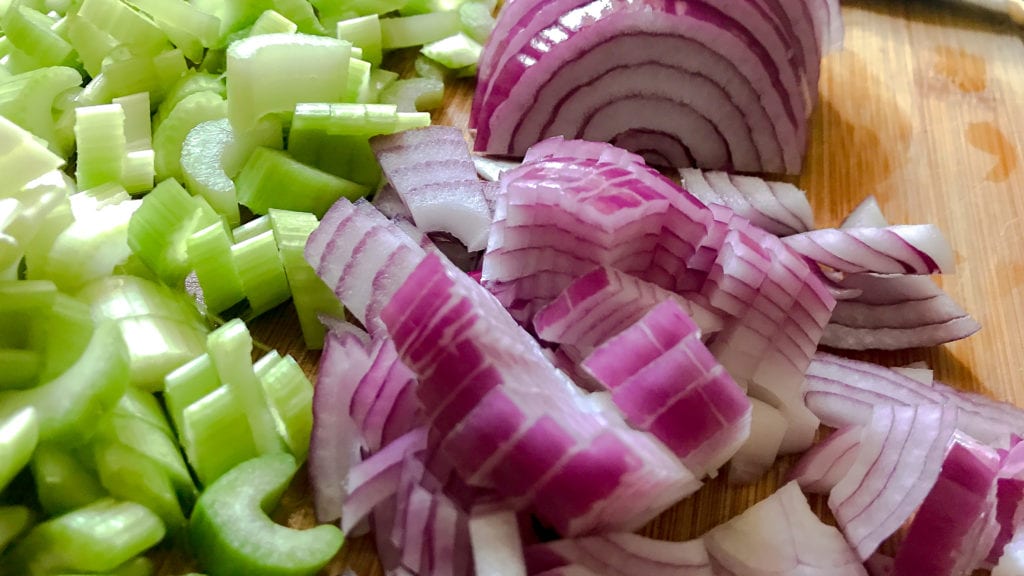 Celery and onion. I don't make many soups without these two ingredients, which works because they are almost always in the house. 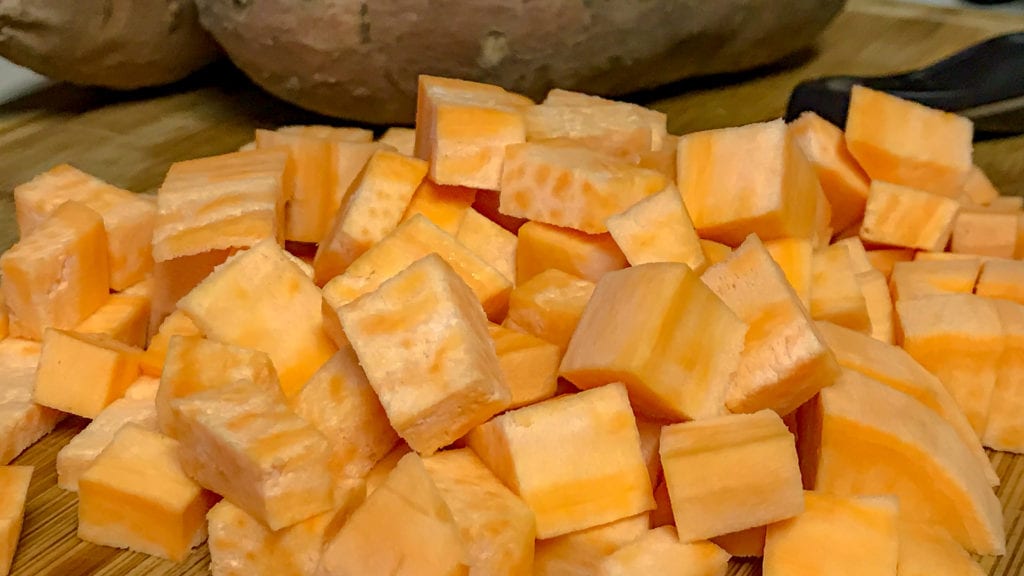 I wasn't kidding when I said the sweet potato looked a little sorry for itself. It just felt a bit dry, but it cooked up just fine. 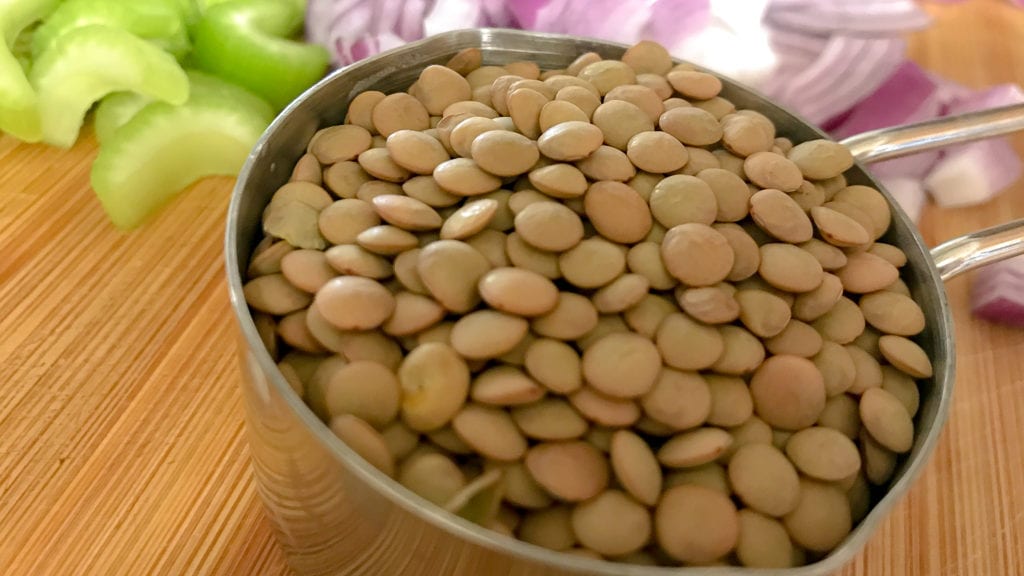 Lentils are a staple  food in this house, even if I'm the only person who eats them. I eat them often! 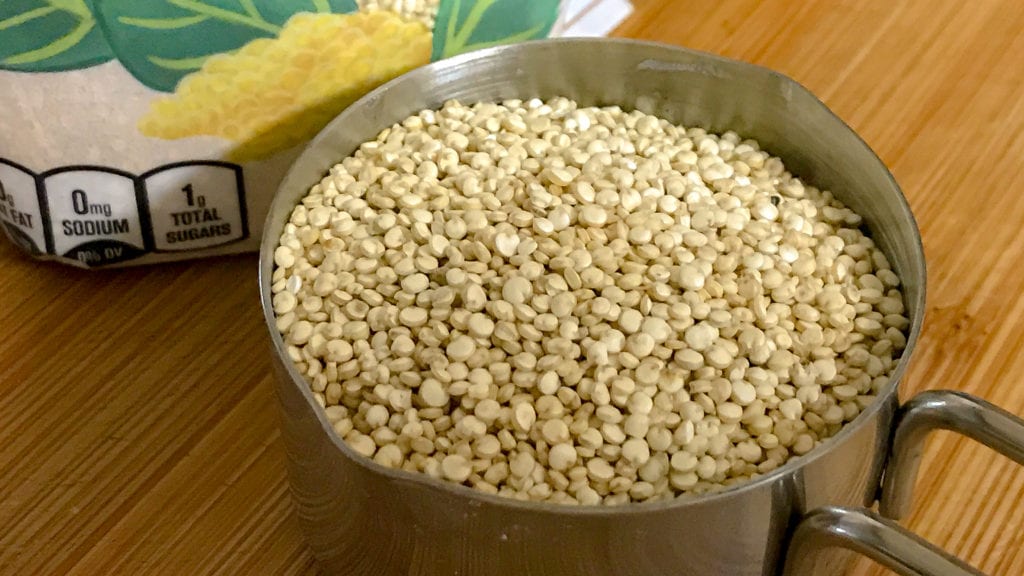 Quinoa is one of my favorite grains. I like adding it to soup because it gives a bit of texture and packs a punch with all kinds of nutrients. Also, nobody knows it's in there, unless my family members read this blog post. But then again, it has the word ‘ veggie' in the title. So I'm probably safe. 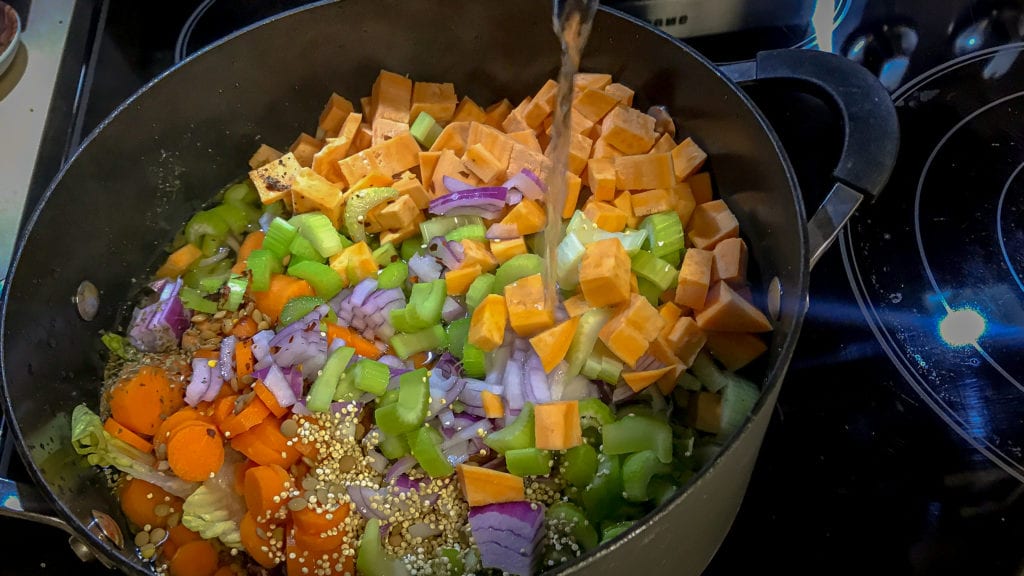 If you were hoping for some classy soup assembly documentary, you're in for a big disappointment. Once everything is in the pot, if I'm using dried stock or bouillon, I just throw it on top of the veggies with the other spices and seasonings and pour the water over the top. 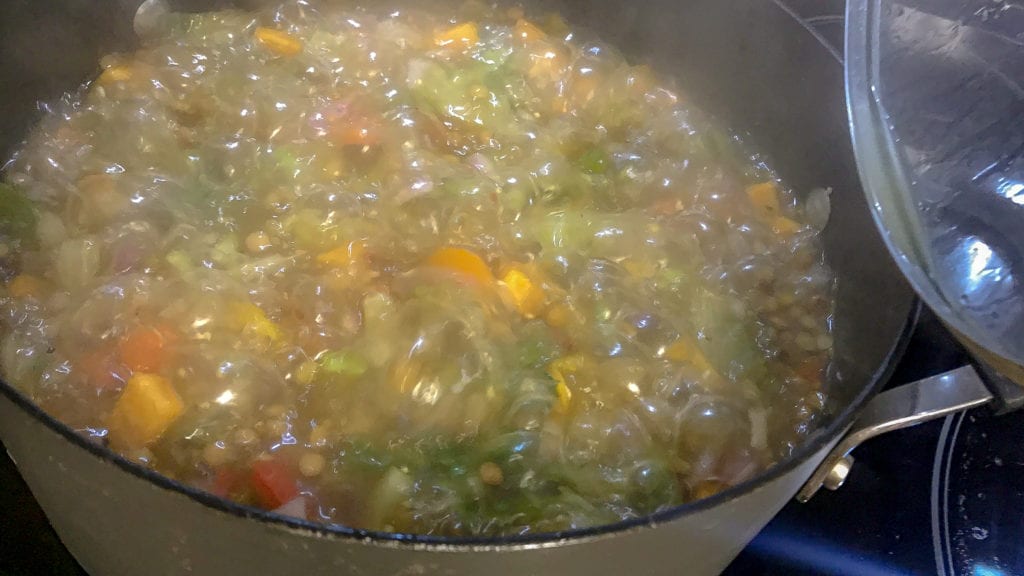 Bring the soup to a rapid boil, reduce the heat to a very low simmer, cover and leave it a couple of hours.  Check it now and then to make sure that your liquid ratio looks more or less where you like it.

Soup is my ultimate comfort food. Especially when I get some warm, home baked bread to go with it.

If you add anything starchy to your soup, for example, potatoes, sweet potato, you'll need a little extra water.

For soups with any kind of meat, I usually add a dash of liquid smoke and some Worcestershire Sauce.

When you're making a meal out of leftovers, you can't really screw it up.

You make the rules and you eat the soup. 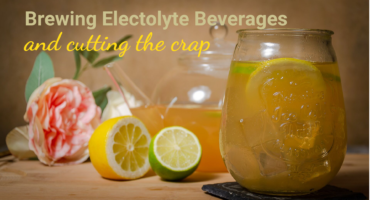 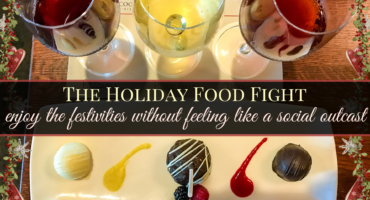 How to Manage your Diet over the Holidays 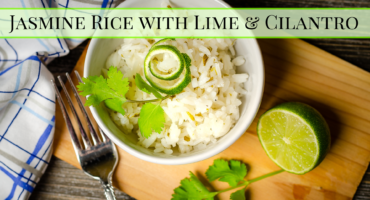