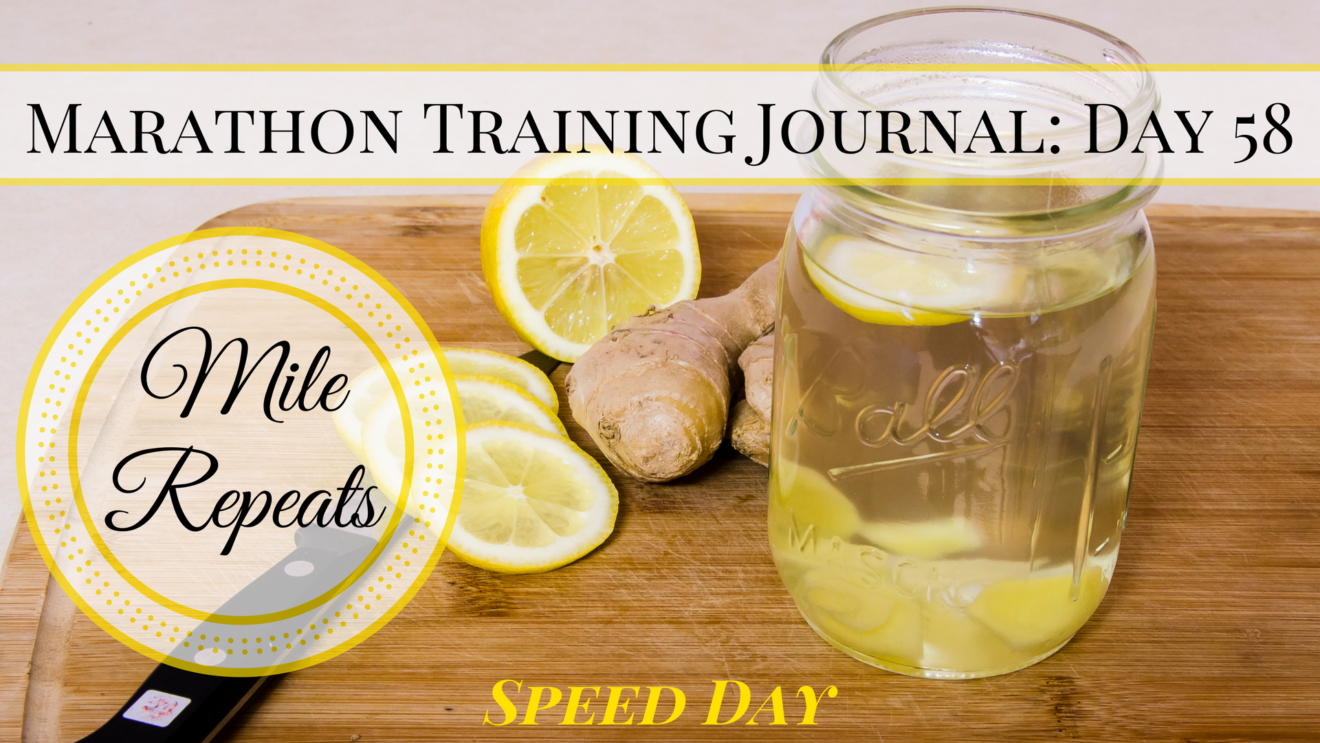 Yes, it's a speed workout day again. I don't know if it's because of all the training time lost last week or the bite of reality that reminded me I'm halfway through the training plan, but I was ready for this one.

Well, perhaps not completely organized.  Last night I thought it was 800's and then noticed this morning I was looking at the wrong day,but I was enthusiastic. About speed work! Can you believe …?

A Psychological Commitment To Do It Right

Sometimes the way you think sets you up for success or failure. When I got up, all I allowed myself to think was that I would do this and give it my best. I wanted to stick to the workout instructions and resist the urge to push any harder.  My aim was to keep my mile repeats within target pace range and to be consistent with them.

Getting used to running at a certain pace takes practice, but it doesn't take long to get a feel for running at a certain speed. This is a very specific workout and I made sure it was programmed into my watch before I left. I gave myself 5 seconds leeway on either side to allow for inclines and declines. Running by effort is something I am familiar with doing and getting the average right over the mile meant sticking to the instructions.

Getting Fired Up To Start The Way I Want To Finish

Warming up for speed work is more important than for a long run.

Long runs usually start out at an easy pace. If they don't, I adapt them to give myself some easy miles to find myself within the run. That's just how my body is happy. Perhaps it's just because I don't live in a young body anymore; maybe it's the way I am. It doesn't matter. I know what works for me and I need the warm up to wake my muscles from their restful state. Otherwise they take their blessed, sweet time getting with the program.

The pace kicked in at the start of the third mile, so the first two weren't going to serve as a good enough warm up for this “takes three to wake up” girl. Somehow, knowing that from the start had my mind engaged in the task ahead and my first couple of miles were surprisingly focused, even though they were easy pace.

The Power of Attitude

I remember enjoying this run a few times during my last training cycle. So much emotion and psychology goes into a specified workout like this. I wonder if the positive memories help too. They probably do play at least a small part in the attitude, setting out.

Whatever the reason, instead of suffering a mental block and being overcome by apathy about the mile repeats, I didn't think about them as speed training. That's a trigger for me to check out. I wasn't going to go there, and I didn't.

Instead, because each of the miles is at a pace that has to be sustainable over a long distance, the effort level is manageable. Still, a fair amount of effort is necessary. It was all programmed into my watch. I only forgot one thing and I'll talk about that later, but it didn't affect the run itself.

If you're curious about the structure of this run, I'll break it down for you.

The first two miles are a comfortable, but steady pace. They were meant to be evenly paced. I was within five seconds of where I thought I should be, so that gave me a confidence boost. It wasn't about pace as much as it was about tuning in and being disciplined.

After the two miles, one mile is run at goal marathon pace followed by a recovery run for ninety seconds. For today's workout, the race pace mile and recovery period were repeated five more times to make a total of six race pace miles. Those are the mile repeats.

Focus, Feel It and Stick With The Plan

Because marathon pace is not an all out, hard effort run like, say for example 10k pace, the minute and a half recovery is not supposed to have a walk or rest. It should be slowed down sufficiently to be allow me to sustain the same speed for the mile to follow. This is all about staying in control.

I had to really focus for the first one to get a feel for the pace. I'm not used to being so specific, but I set my watch with only a five second buffer on either side and it gives me an alert alarm if I go too fast or slow down too much.

It helps a lot because I don't have to look at the watch and if I'm off pace the screen lights up to show me only the current pace so I can see if I'm running too fast or not quickly enough.

What I like about mile repeats is that each segment is long enough to get a feel for the pace and the recovery is short enough that I don't fall too far out of the zone. The longer the interval, the better I  cope with it. That's why tempo runs are much more enjoyable than running strides or 400's.

The One Thing I Forgot To Do

There was just one thing I didn't remember. It wasn't a deal breaker, but it gets me every time.  When I put a workout into my watch, I run the workout portion and when it's over I just keep running at any pace I please, until I am done. When I sync the workout to my watch, I never remember to add in my grace period.

With the regular beeps for gear changes, added to the occasional off pace alert, there is one thing I overlook when it happens. When the workout is complete, Garmin stops it. That's it; the end. As I said, it's not a big deal, but it is annoying because I always get back and try stop the watch and then notice I've just started it. It's a smart watch; it stops all by itself because it knows stuff.

Next time I have to remember to strip that thing of its smarts and add in a couple of miles just for me.

Today's run was an accomplishment for me. I stayed on pace, within the five second buffer on either side for every one of the six mile repeats. But the biggest achievement was holding onto the focus and discipline to control my run and stay within the boundaries defined. Paying attention is not a running strength that I can boast too much about.

But I officially declare this Tuesday a victory. Shoes do not make a run. They can make running uncomfortable and cause all kinds of problems if you make a bad choice, but they won't make you run faster. They're shoes.

Today I took the Newtons out again, determined to give them a test on speed day. I like them a lot and had to see how they felt on a controlled, but faster than comfortable run. They are officially contenders for marathon day.

The first couple of days I wore them I was very aware of the additional piece of rubber under the forefoot. It's not uncomfortable at all, but it's different to any shoe I've ever used. The low drop at 2 mm also seems well suited to my running style and I never gave a thought to my feet. Also, today I was blissfully unaware of the extra piece of outer sole. I'm very impressed with what I've experienced so far. And you'll be pleased to hear that I did not feed them vegetable juice this morning!