After a lighter training week and a few days of rest, I feel really fresh and recharged again. The minor residual cold symptoms are pretty much sliding under the radar with no effect on me now.  Having had time to think and review the last five weeks, I'm ready to adjust my training schedule.

I'm not afraid to shift things around to work for me, as long as I'm doing it purposefully and not just for the heck of it or the sake of convenience or preference. 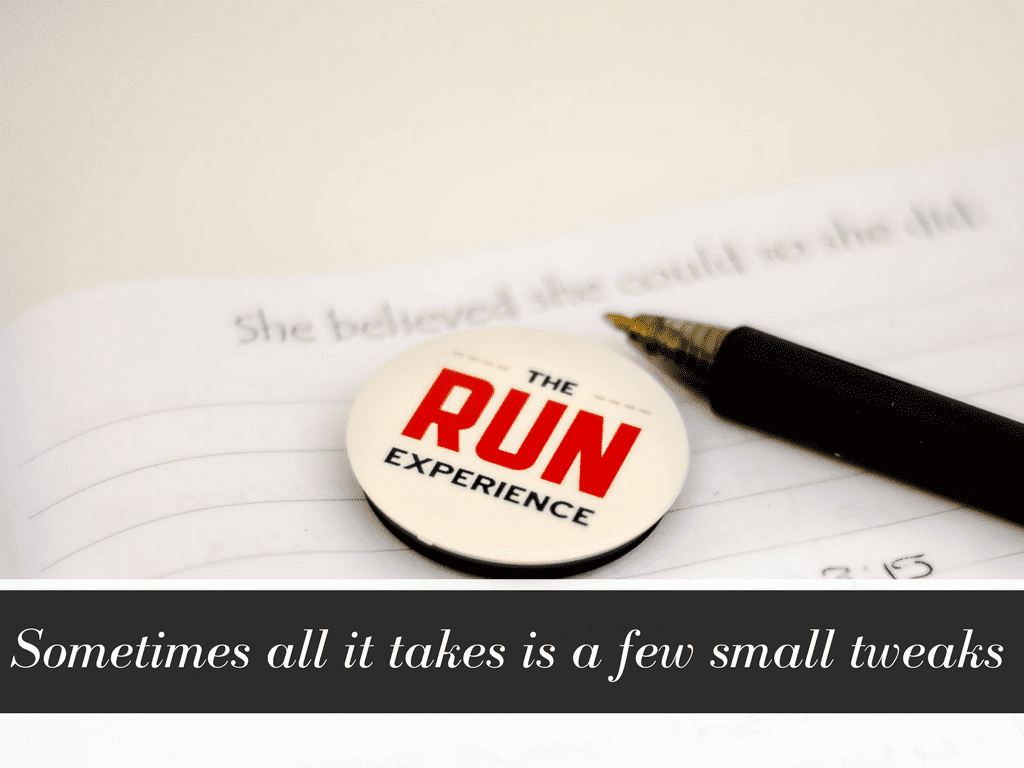 Why Adjust My Training Schedule Now?

It's pretty simple. If you read the earlier posts from this journal, I mentioned a few times that I'm tuning in to how my body recovers. This involved putting myself through a bit of training stress and then monitoring how I feel. In the day or days following. This is why I like to keep notes on my training. It's also why I make a point of writing about how I feel and not just recording statistics. I can get those from my apps. The stuff that goes on in my day to day life doesn't show up in my Garmin account.

I've noticed a few things that are consistent throughout the training.  They day after my speed sessions, which right now are on Tuesdays and Thursdays, I am pretty wiped out. It's not a newsflash that speed work takes a lot out of me. I bounce back from the longer, easy paced runs, but the short distances at hard effort levels take everything out of me.

This is not that the plan is badly structured. I typically do my long run on Fridays. According the the training plan, Friday is a rest day and the long run is on Saturday. But Saturday is our family day so last time I used this program I switched them and it was fine.  This time around I'm feeling pretty spent by the end of the week. It's not the way I want to go into my long run.

Figuring Out How to Make the Changes

So how do I adjust the training schedule without screwing it up again? Truthfully, there is no way to know that for sure, and I am willing to take a risk for the sake of learning something that will help me.

For a start, I know that Saturday will remain a rest day. That leaves six days for training with room for an additional rest day at any time, if necessary.

I moved on to the good stuff. The things that are in the right place or where it's hard for me to move them. My long run is typically on a Friday and I like it that way. It works well for me.  I want to run the day before a long run, but I don't want it to be a hard workout. So the Friday and Saturdays stay as they are.

The rest is pretty flexible. So where are the issues?

Well hill repeats the day before a long run … I would prefer to have an easy run the day before.  So I need to move those. If I shift hills and speed work from Thursday to earlier in the week, I'll start backing up two consecutive speed days. That's not going to work either.

So I took out the fun day on Sunday and put in my Intervals and Drills from Tuesday and shifted my Thursday hills and/or speed to Wednesday. I'm going to roll with this a few weeks and see how it goes, but I think it is going to work better from a recovery standpoint.

Intervals Were Not Boring Today

My sense of humor must be on top form today.

For a start, I am putting intervals on Fun Day. Uh … yeah, you know me by now. It's funny.

Next, I don't like running in the rain. I wear contact lenses and when rain gets into my eyes they hurt and I can't see. Not a problem today because the forecast all the way through until late afternoon is dry and partly cloudy.  The problem with this was that it was raining when I left the house. Yes, they totally screwed this one up!

I decided to grit my teeth and just do the best I can. The intervals were pretty easy as they had one and two mile segements and the run was only around 8 miles. See? My attitude was great.  I started my watch after my warm-up. The rain had started to get really heavy by now and I reasoned that I'm already wet and I'll tilt my head slightly so that it doesn't run right into my eyes. I'm feeling good today and I'm going to do this.

Technical Problems. Intervals With No Watch

I paid no attention to my watch until I realized that two miles must have passed and I hadn't heard it beep. Was it even started? Yes, there was the screen showing numbers and duration. But nothing else. No pace. No mile markers. I tried to fiddle with it while I was running and couldn't do two things at once. My solution was to suck it up and go by feel.

Trying to guess if I was anywhere near 10K race pace was futile. I did the best I could.  If I wanted to fix the watch display I'd have to stop. It was impossible to do anything in the rain.  I guess I somehow turned off or deleted a couple of screens somehow but I couldn't see what I was doing and my feet were soaked as the rain poured heavily. I could feel the rivers of water running through my shoes as they made yucky, squishy sounds. And I had soggy shoes!

It could have been worse. At least the water wasn't cold. I had a feel for where the five mile mark was and I fumbled through the run hoping for the best.

Half and Half Make One Whole

After the five miles (good guess – I was 0.03 miles short) I stopped and stopped the watch. I had to fix whatever I had done to mess things up, but for the life of me, I could not see what I had done, let alone how to fix it. The screen with the pace and distance was non existent.  I felt like I'd been freshly fished out of a lake, pouring with water. It was dark, my eyes were scratchy and irritated and I couldn't see a thing.  I could stop now or just start a new run and carry on. Besides, My Knuckle Lights are waterproof and this was a great time to test them out. And the rain looks pretty cool shimmering down in the moving beams.

It's a new week. I'm not quitting and I felt really good, in spite of all the things I don't like. After feeling so terrible last week, this was an opportunity to get a good run in and not cry about the weather. I could whine about it later if I felt like it.

Start the watch and let's go around again.  I skipped the detours and rounded off just over three miles with the last interval set.

There is hope for Sunday speed work. while it may not make me like it more, I do prefer to do it on fresh legs after a rest day. Let's see how the rest of the week shapes up. I can reassess then, but so far, there are no red flags for Day one. Aside from the weather guys getting things totally wrong! 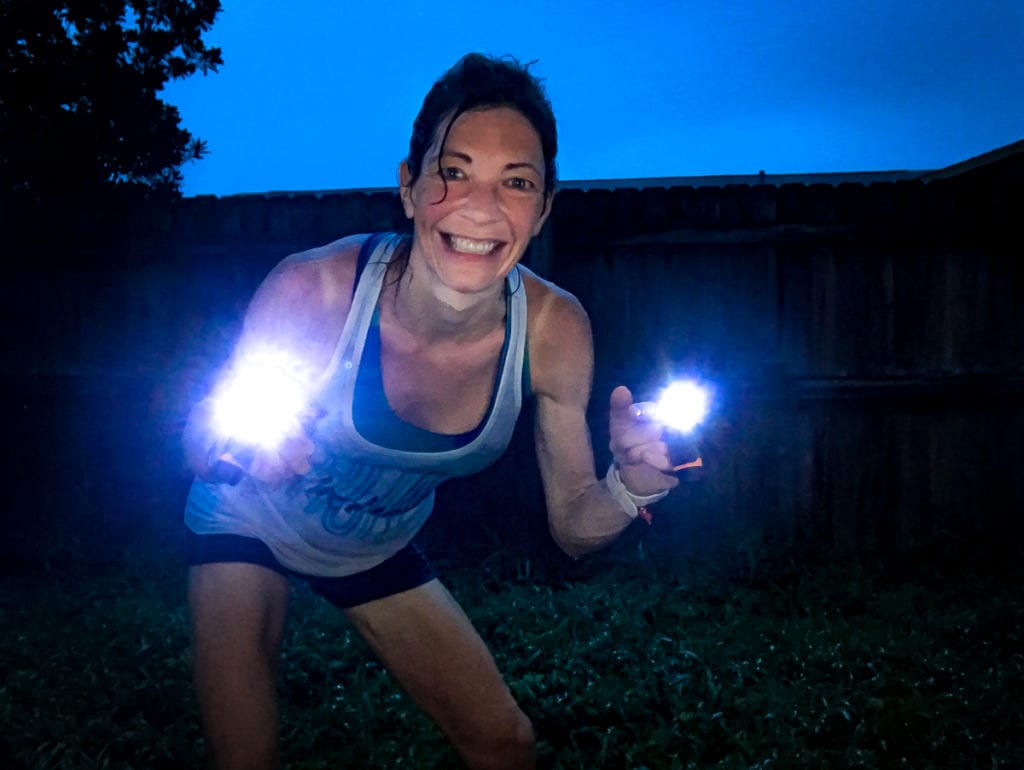